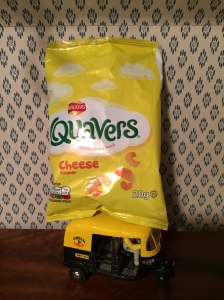 Quavers are a surprise. The picture on the bag made me think they would have the texture and density of Fritos. I allowed myself to fantasize about making “Quaver pie” with artisan chili of my own invention. Blake Lively would find out about this recipe, and mention it on Preserve. If I had pulled my head out of the clouds, I would have realized that Quavers ≠ Fritos based solely on the very obvious description of Quavers as a “potato snack.”  I do not think Quavers would enhance my hypothetical artisan chili, but this incompatibility does not diminish their success as a snacky snack.

Quavers are light and dissolve fairly easily, and they also deliver a very satisfying crunch, probably due to tiny air bubbles (like Munchos). They taste vaguely cheesy at first, but I think their strongest flavor is actually onion, which is two-thirds of the way down the ingredient list. I liked them. If I’m being honest, I think these would be great for people who just spent the night partying, and are winding down with a little junk food binge. This type of binge is usually preceded by a desperate scavenge, where one hopes to discover food which has otherwise proved evasive. Imagine discovering Quavers during this forage- such joy! Finding yourself surrounded by Quavers bags in the morning- a decidedly different sensation.

p.s. While writing this post, I discovered that Frito-Lay has a page dedicated to recipes made with Frito-Lay products, INCLUDING MOUNTAIN DEW. Emphasis added for obvious reasons. Instead of artisan chili, maybe I should host a dinner, and after everyone says “that was delicious,” I’ll tell them their chicken was marinated in Mountain Dew. It would be like those Folger’s ads from the 80s.