Although I have a bit of a cold and I’m a bit sleepy, I am here as your humble junk food servant to celebrate National Cheetos Day.  It would be remiss of me to end the day without reflecting on the deliciousness of Cheetos.  Cheetos have helped me through some long and arduous days.  Best catalyzed with Diet Dr. Pepper, they serve as fuel for concentration and creativity (that is, after you take care of the sticky cheese dust, because you don’t really want that getting stuck in your keyboard.*)  Katy Perry has become the Patron Saint of Hot Cheetos, which many argue are even more delicious than regular Cheetos.  Her influence was apparent when I arrived in London.  I went to a grocery store in Sloane Square and noticed a mountain of Cheetos for sale.  Upon further inspection, I noticed that they were all Hot Cheetos.  I think this is due to Saint Katy’s influence.  Personally, I am an equal opportunity Cheeto Lover.  I must admit, however, that I haven’t yet tried some of the new Cheetos varieties, including Sweetos.  Chester Cheeto should be ashamed of me.  I’ll commit in advance to sampling them the next time I visit the U.S. of A.

I bid you all good night.  May visions of cheesy poofs dance in your heads.

*I’ve noticed that food getting stuck in my keyboard is an issue I’ve addressed in few of my posts.  Do I need a plastic cover that goes over my keyboard?  Should I cover it with saran wrap?  Should I post this question on Quora?

What can I say about Nik Naks?  I don’t think there’s anything quite like Nice ‘N’ Spicy Nik Naks (alliterative, no?) in the U.S.  On the package, Nik Naks are described as “knobbly, wacky sticks of corn.”  This led me to believe that these would look kind of like wiry Fritos.  Instead, Nik Naks are actually like Cheetos.  The appearance is where their similarities end, as least with regard to this particular flavor. 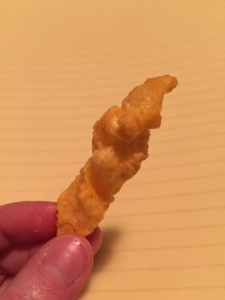 My first impression was “Indian food.”  These taste like vegetable samosas.  As I’m a fan of Indian cuisine, I enjoyed these snacks very much.  I noted that curry powder is listed in the ingredients, so I assume that’s what’s prompting happy memories of my friends’ moms samosas (because the best samosas are made by friends’ moms).  These are also made with barley malt vinegar, which provokes a salt and vinegar chip aftertaste, which I also like.

I should note that I wrote this review while eating the Nik Naks.  I think that’s the best way to capture my impressions.  Unfortunately, the side effect of this is that my computer keys have become so greasy I can see my own reflection in them.  If you look closely, you can see the grease in the above picture.  It’s going to be pretty embarrassing when I have to take my computer in for a repair because grease has locked up the keyboard.  Although let’s be honest, the computer repairmen probably see that (and worse) all the time.