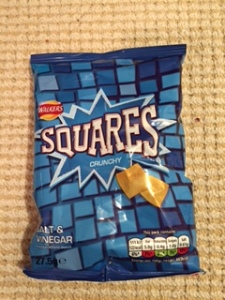 First of all, what’s with junk food labeling here in the UK? The labels seem to include either extremely specific and uninspired descriptions (i.e. “unmistakably cheesy”) or pictures that suggest an entirely different density.  Squares fall into the latter category.  I thought these would be thicker, like little salt & vinegar crackers, which seemed kind of interesting.  I thought maybe crackers would retain even more savory zing crystals than chips.  Alas, these are pretty much chips squared, only in terms of the shape, not (salt + vinegar) 2 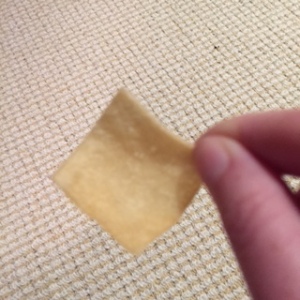 I will grant that they don’t seem as oily as potato chips, although oiliness levels do vary from chip to chip, so I’m not sure if this gives Squares an advantage compared to salt & vinegar chips generally.  The lightness would be good if you just want a little bit of salt & vinegar.  I suspect, however, that most people would rather just go full throttle with their S&V crisps.

According to a label on the back, “snacks with angles is where it’s at.”  Shouldn’t it say “snacks with angles are where it’s at?”  Am I being too particular?  The label goes on to note that “squares are unashamedly different.”  Walkers is all about encouraging chip shape acceptance.  The label also claims that these are the only crisps that let you “build little crisp houses, before munching and crunching.”  I suppose that’s true, only if you’re the Zaha Hadid of the junk food world.  The rest of us should stick to building houses with saltines.